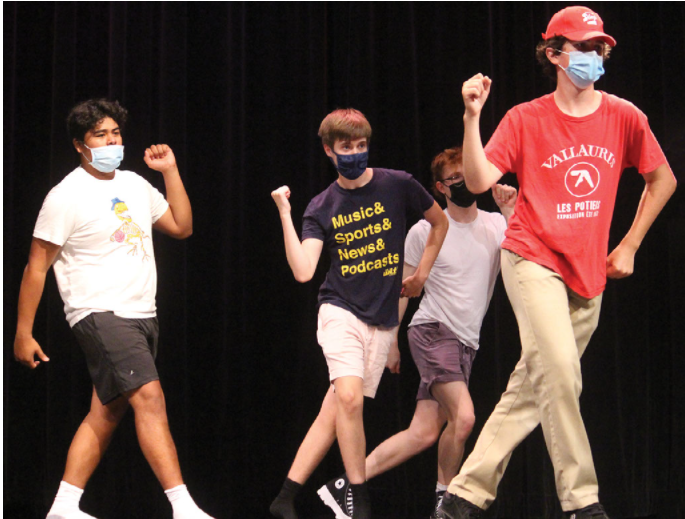 As the excited crowd grows silent in order to hear emcees Maia Halm ‘22 and Isabella Tharpe ‘22 announce the 2021-2022 Mr. LT winner, a palpable moment of anticipation builds as first and second runner up have already been named. After the suspense was built up, it was torn down with the announcement of Beaudan Brown ‘22 winning this year’s pageant.

“It was just joy. I just feel like it was such an exciting experience, it was so cool to have everyone else around me and I just really appreciated it,” Brown said.

The ninth annual Mr. LT pageant took place on Sept. 27. While it typically happens in the spring, director of student activities, Peter Geddeis, and student council president, Halm, came up with the idea to kick off homecoming week.

“We haven’t had a normal year in 18 months, so we thought of jampacking homecoming week with a bunch of activities to get everybody excited,” Halm said.

“It was part of a longer conversation towards the end of the year. After we did last year’s Mr. LT  it just kind of got thrown out there,” Geddeis said.

In order to be a part of the Mr. LT pageant, one must be a junior or senior boy and fill out an application. This year there were 15 boys who participated in the event: 14 seniors and one junior .

“I’ve heard that you get super close with everyone and we already are because we all just joke around and have a good time,” contestant Ryan Taylor ‘22 said.

The pageant is the biggest student council fundraiser of the year, raising a total of $5,035. All the proceeds go towards the Jack Kunkle Memorial Foundation, a scholarship for performing arts students, Geddeis said. This was created in the memory of Jack Kunkle ‘14 who was the first Mr. LT winner. Kunkle passed away from brain cancer a few months after graduating.

“Jack was the first Mr. LT and really has become what I look for,” history teacher and long-time Mr. LT judge, Jessica Drogos, said. “He was so original and so funny doing his stand up comedy talent.”

All the judges look for something different in Mr. LT. However, common characteristics they look for are creativity, uniqueness, and performance, among others, Drogos said.

“What’s really nice to see is the comradery that the boys have with one another, it’s like they’re in this together, and I think it bonds them,” Drogos said.

The boys were judged on three different criteria: swimsuit, talent, and formal wear, Geddeis said. Each round they were judged out of 10 points and the boys with the highest score moved onto the final, where the audience and judges picked the winner.

“They really root for each other and applaud each other, and I think it is an honest and genuine thing,” Drogos said.