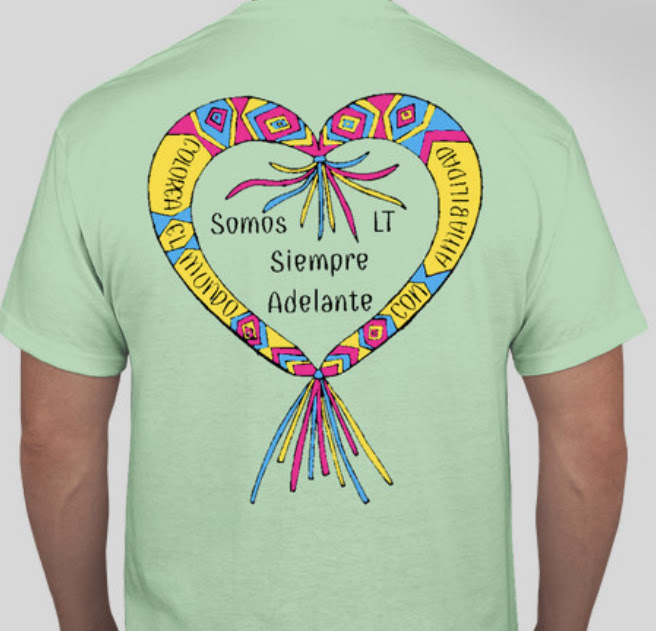 Back of the T-shirt this year (photo courtesy of Plichta).

During after school Zoom meetings, LT students are helping people in Latin America. The Pulsera Project, a fair trade certified organization for artisans in Nicaragua and Guatemala,  sells bracelets to help people in need. By doing this, the project creates opportunities for people in those countries to make an income producing pulseras, which is Spanish for bracelets.

Artisans hand weave their bracelets and the Pulsera Project sells them to schools in the United States whose teachers and students then sell the bracelets throughout the school, Spanish teacher Lisa Plichta said.

It is a service-learning project where students can help other communities while learning about the world and its different cultures. Each year LT also creates and sells T-shirts to raise a total of $4,000 for the organization and to promote the sale of the bracelets.

The Pulsera Project started at LT in 2015 when Plichta was in a graduate school program and the concept of service learning came up, she said.

“I really like the idea behind students doing real work that can help improve our world,” Plichta said. “I figured LT students, if I knew them at all, would be interested in something like that.”

The project has been a staple for students at LT; however, due to COVID-19, sales have been much harder, Plichta said. The bracelets are ten dollars this year, like every year. Currently, students meet via Zoom to help design the $13 T-shirts and organize the sales. Even though the project is more difficult to pursue this year, the students that attend meetings, such as Madison Kraus ‘22, still feel that the project has meaning.

“I thought it would be really cool because I support the organization, and it feels like I’m actually doing something instead of just watching it from afar,” Kraus said. “It’s a much bigger thing than just myself and the LT students and teachers. That’s why I’m drawn to it. It impacts people we don’t even know and offers them opportunities that change their lives.”

Usually students can buy T-shirts from their Spanish teachers, and the bracelets are sold during lunch. This year, the only way to buy the T-shirts has been off of Plichta’s Canvas homepage and through this Google form. The bracelets being sold in Plichta’s classroom: in room 321 at NC.

“This project is like the song ‘El Mismo Sol’ by Alavro Soler because even though people in Nicaragua and Guatemala live so far away, we still all live under the same sun,” Plichta said.