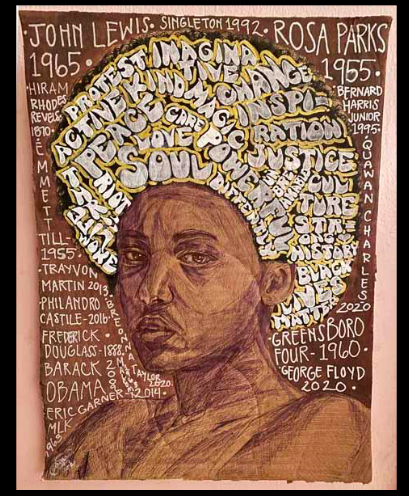 At 4 years old, Persephone Herman ‘22 was drawing detailed pictures of Teen Titans and other cartoon characters. Her parents would joke that she had traced these very realistic drawings, mother JanToya Herman said. Herman casually showed them how she had not only drawn these images herself but completely from memory.

“We knew she was talented, but we just didn’t realize she was gifted,” JanToya said.

When she was young Herman attended art classes at the Kensington art center taught by Rachel Weaver-Rivera. There, she took drawing, painting and multimedia classes.

“I noticed early on not only Herman’s enjoyment of being in a studio and working with her hands, but also her big heart and big ideas that go way beyond the studio,” Rivera said.

A piece she created in 2019 titled “No Justice, No Peace: Heaven’s Gained Another Angel Too Soon” is an example of how Herman uses her art to speak up and express her feelings, she said. The piece features a black woman with a slash across her face and a halo over her head. Herman created this piece to represent the discrimination she feels as a black woman today.

Herman knew she wanted to continue taking art in college, and kept hearing about the School of the Art Institute of Chicago (SAIC). SAIC’s ranking as the second best fine arts graduate school in the country largely influenced Herman’s decision to apply, she said. As a current junior, Herman wanted to ensure she had a solid portfolio when she applied as a senior and decided to speak with SAIC admissions counselors. However, the counselors were so impressed that they encouraged Herman to apply to the school this year. Welcoming the challenge, Herman applied to SAIC on Nov. 12 and found out on Jan. 28 that she had been accepted.

“We are proud beyond words. Persephone has been working hard since the first day she picked up a pen and paper,” JanToya said. “I’m just thankful that she’s able to pursue her dreams.”

When applying to SAIC, Herman submitted a common application, teacher letters of recommendation, and a portfolio of her work. Herman’s portfolio contained 15 pieces of art she had created from eighth grade through sophomore year. Included was a self portrait titled “Ebb and Flow of Black Excellence.” In this image, Herman is surrounded by dates that are important to the black community, such as former President Barack Obama’s inauguration in 2009 and Emmet Till’s brutal murder in 1955, Herman said.

“The message of this piece is that though certain times may have been difficult throughout history, it is the way that the black community and people all around speak on these subjects that defines black excellence and shows growth,” Herman said. “There were moments in history that seemed like downs such as the killing of George Floyd, but there were also ways we took that bad and made it into good—for example the protests following his death.”

Working with LT and the College of Dupage, Herman is now focused on gaining the credits she needs to graduate LT early. She currently has 21 credits but needs 23 to graduate, Herman said. She will be taking an English class at LT over the summer and a physical education class in the spring to fulfill these requirements.

Herman will be joining the other hundreds of freshmen attending SAIC in the fall from across the world, she said. At SAIC, undergraduates do not declare specific majors and all students receive a fine arts degree. This allows students to take many different classes instead and gain a wide variety of knowledge. While Herman has yet to sign up for next year’s classes, she is looking forward to taking classes outside of her comfort zone such as voice acting.

“I’m just looking forward to doing as much as I can at SAIC because there are so many different opportunities and different mediums that I really want to try,” Herman said.

Next year, Herman plans to live at home for at least a semester, surrounded by her family who have consistently supported her passion for art, Herman said.

“I know going to college is a really big step, but I’ve been preparing for so long now,” Herman said. “Art is how I express myself, and I am so glad I get to attend SAIC.”