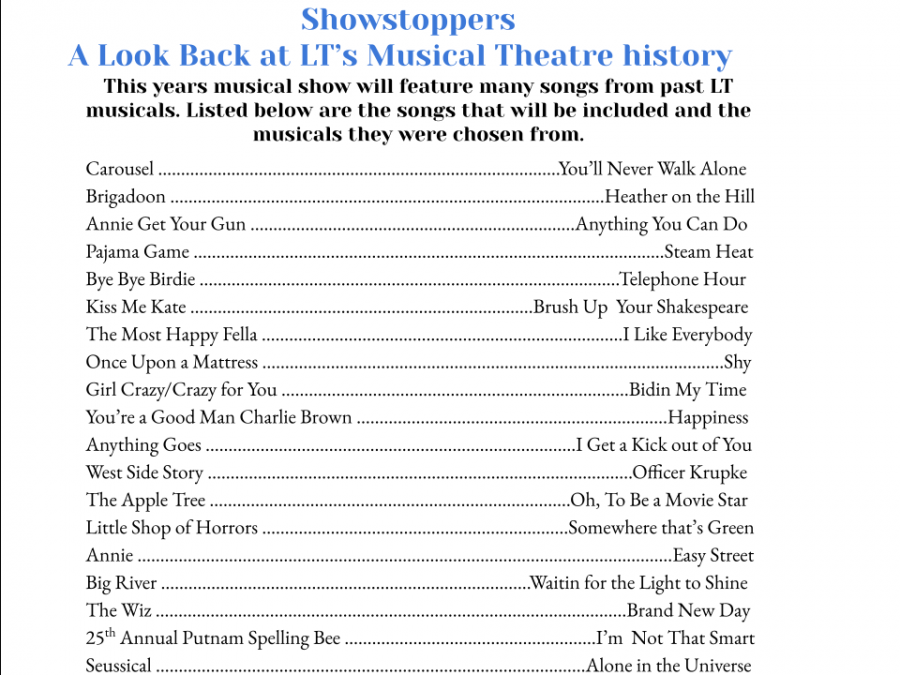 The LT Theatre department has announced that this year’s musical will be “Showstoppers.” The show will focus on individual songs and their accompanying scenes from the last several decades of LT musicals. There are 33 LT students in the cast of this play, performing 19 different numbers from 19 different shows in order to tell the full story of LT’s musical history.

“This show is not one clear linear story,” director Lawrence Keller said. “It is more of a review, where we try to highlight students’ talents.”

Students’ talents were assessed when they auditioned in early December. Unlike previous years, those trying out submitted two Flipgrid videos, one of themselves singing and one of them dancing, cast member Amber Phillips ‘22 said.

Cast lists were published Dec. 16 and rehearsals began on Jan. 13. Currently all rehearsals are held over Zoom. Any students in the show can schedule individual rehearsals with the two directors, Mike Kuehl and Keller, for acting help along with music teacher John Musick for singing help.

COVID-19 is the main reason for choosing this style of musical, Keller said.

“It became really really difficult for us to choose a traditional musical with the challenges of social distancing and the likelihood we wouldn’t be able to use the theater,” Keller said.

As of now, the show will be uploaded on YouTube for the community to view before the end of the semester. However, the directors are holding out hope for some warmer weather, where opening night might be able to be filmed outdoors, Keller said.

“Whether it is on the steps of the bell tower or the outdoor stage at South Campus. We would like to give the show some visual sense that’s not just people singing in a room,” Keller said.

Because of this, a date has not yet been set for opening night.

Annie Tracy ‘22, member of the LT Theatre Board, is one of the students who works on publicizing LT shows in order to gain a larger audience for opening night. They are also a part of the “Showstoppers” cast and have been a part of many past LT Theatre productions. Tracy is thankful to be in “Showstoppers” because it gives them the opportunity to more closely interact with the LT Theatre community that they have come to be a part of.

Phillips is also looking forward to singing “Annie Get Your Gun” with her brother Lukas Phillips ‘24 and two other sets of siblings.

“I think it will be fun. We get along really well, and it’s just nice being able to act with someone else in person while other people have to be at home alone during rehearsals,” Phillips said.

Both siblings have acted in previous plays but have never been in the same cast. Amber has been in the last three musicals but this will be Lukas’ first show, Amber said. Lukas has seen his older sisters perform in previous LT musicals and is excited to be in one himself, he said.

“I’m looking forward to making friends and having new experiences through the characters I play,” Lukas said.

will also give alumni the opportunity to reminisce about shows they were in or saw in their time at LT, Keller said.

“It’s important to have this show because even in this horrible time, there is still joy to be had,” Keller said.