Student speaks out against racial injustice in Western Springs 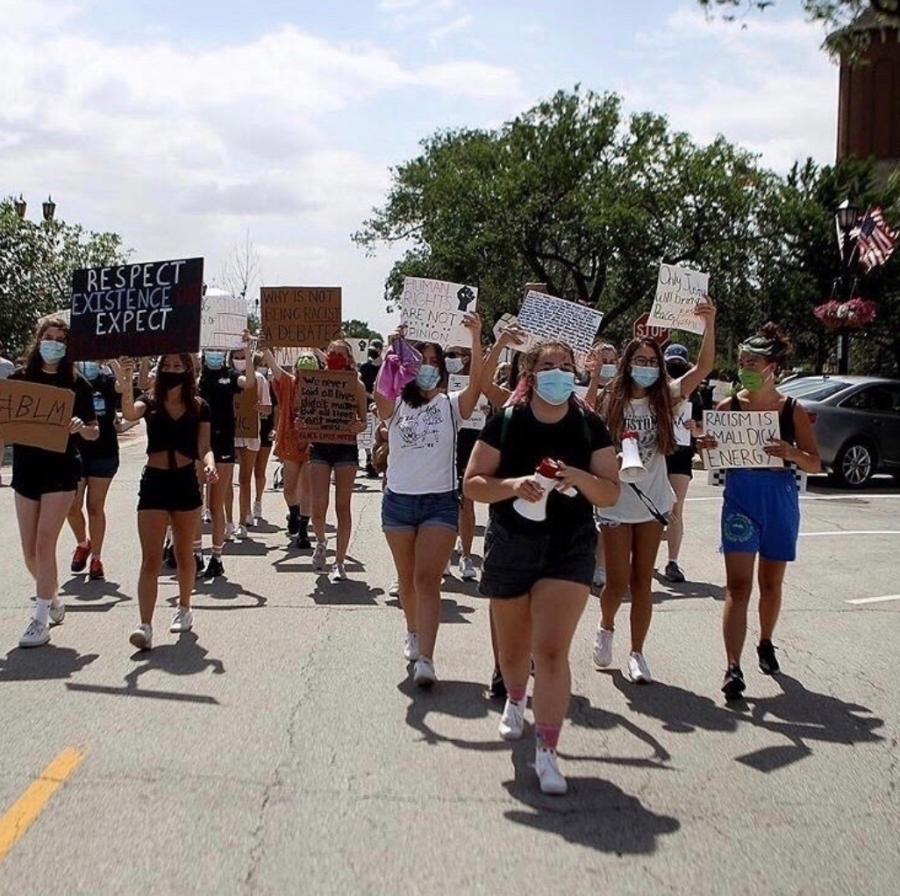 On the afternoon of June 3, the streets of Downtown LaGrange were lined with protestors and those in support of the “Black Lives Matter” movement; many were holding signs and were eager to bring awareness to social injustices against Black Americans. Speakers shared their stories, held a moment of silence and inspired many, with one speaker stating how Black lives matter today, tomorrow, the next day on, and forever.

A specific member of the crowd, Grace Regan ’22, was especially moved by those words, and it inspired her to work to continue to bring awareness to the community.

“[I remember thinking to myself] that this [movement] cannot end here,” Reagan said.“I just became so passionate and driven from the moment I heard that.”

The night of that protest, Reagan immediately started planning for a potential protest in her town of Western Springs. After coming up with a date of June 20 with her friends, they made posters listing all the information regarding the protest. She then reached out to Police Chief of Western Springs David Albrecht, who conferred to her about things regarding safety on both ends and keeping things orderly .

“We made it very clear that everyone [had to wear] a mask and were very careful,” Reagan said.

Being in the midst of a pandemic, Reagan tried her best to take everyone’s health and safety into consideration, even bringing extra masks for everyone on the day of the protest. A friend of Reagan’s, Gabi Mendez’ 22, helped distribute waters, granola bars and flyers with safety information and the route, which began at the Western Springs Water Tower and ended at South Campus.

“When I was towards the front of the march, I looked back and saw the giant crowd that was following, and at that moment, I felt so happy to see others marching along for this movement,” Mendez said.

Having been very vocal with her support for “Black Lives Matter,” Mendez wanted to help in any way that could make a difference in the community. Helping with parts of the protest was a way for her to do so, she said. Since Mendez was not able to attend the protests held in Downtown Chicago, she decided to instead take to the local streets with her mother by her side. They peacefully walked around Downtown LaGrange on an average Saturday morning, with signs in their hands, one reading: “demand change, demand police accountability.”

Mendez and her mother were greeted with many negative nonverbal reactions such as dirty looks, side eyes and some people whispering about them. Despite that, there were a few people that actually stopped them and thanked them for their work to bring awareness, Mendez said.

“I do think it’s important to raise awareness,” Mendez said, “but I don’t think we should have to be thanked. I feel like that was the least we could do; we will never understand first hand the racism Black people in America go through.”

Reagan and Mendez still try their best to educate others by posting about the movement and other social issues, and even provide resources to those who may need it. Though Regan does not have another protest lined up, she has reached out to the organizers of the Black Lives Matter movement in the Chicagoland area. Since reaching out, she has been helping them with volunteering and might be planning something else with them later this year, she said.

“I just really hope that people realize that there’s so much to be done,” Regan said. “And even though people aren’t talking about it every day, it’s not like [the movement] is something that’s going to [disappear].”

With Western Springs being a densely white populated area, Regan hopes people realize how much privilege they have and acknowledge that they are able to put that to good use. She also said that she wishes to see schools such as Lyons Township continue to acknowledge issues of social injustice and incorporate more diversity, especially within their staff.

“We all have to be a part of a solution towards racial inequality and racial injustice,” Regan said. “I’m really hoping that it’s helping people realize what they can do using [their privilege] and [that they] amplify voices of people of color or those people whose voices can no longer be heard.”