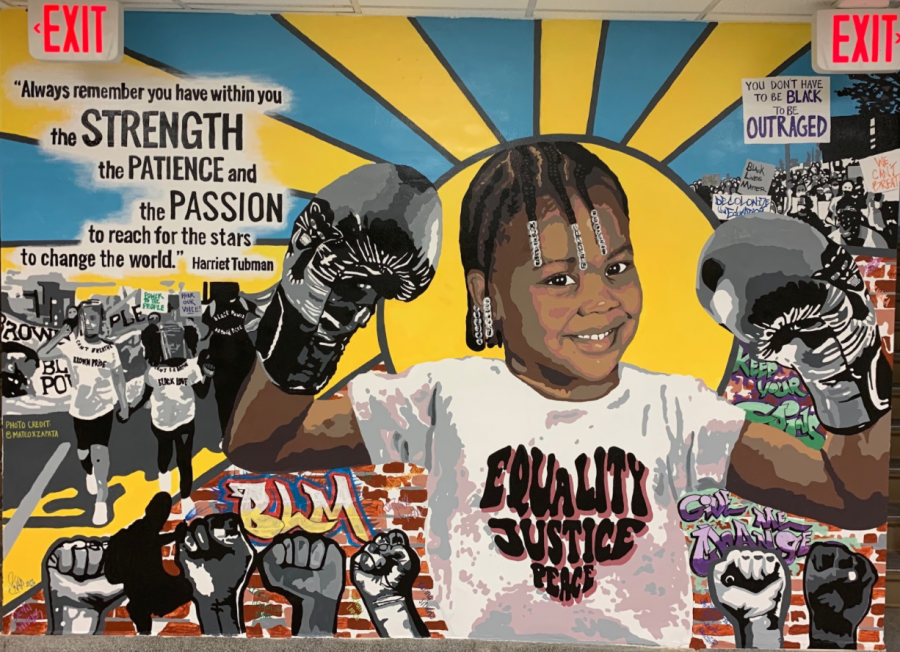 Due to current global events and political discussions, communities have begun to take action to cultivate more diversity and belonging.  LT was no exception, as students and faculty took part in implementing a new diversity mural near the entrance of the North Campus cafeteria to raise awareness of the nation’s current movement for equality.

“The whole mindset of starting this multicultural center was to start the exploration and the reclamation of identity within students of color,” Sanchez said.
“I wanted this mural specifically to capture a very important time we are living: a movement led by youth in search for equity across all sectors of society. It was important for it to be reflected on our walls at LT.”
Sanchez and Zavala each designed three potential concepts for the mural. They worked with students to refine those ideas and presented two final concepts to Principal Brian Waterman, which were later reviewed by a building leadership team, Sanchez said. After the concepts were approved, both staff members approached students who wanted to be involved in the project.

“We explored lots of different ideas about equality and diversity; however, [with] this mural in particular I wanted to emphasize the important role both the youth and females have on social justice as a movement, which is how we encountered the idea of the little African-American girl with the boxing gloves,” Sanchez said. “The image we chose to use is actually the young daughter of LT’s own African-American Liaison, Nikita Hulburt.”

After weeks of planning and discussion, the students helped design a virtual image of what the mural would look like, which they would later project on the wall and paint, Sanchez said.

“I really enjoyed the freedom throughout the creation of the mural. It truly involved the students and allowed us to input our own opinions,” Estafani Lopez ‘21 said. “As a student, it’s just hard to walk through the hallways and not see people who look like you and not feel represented within your own community.”

The project took about two and a half weeks, with students rotating schedules in groups of one to four to follow COVID-19 safety regulations, Lopez said. Masks were required at all times and students could only use their own art supplies while social distancing.

“I have a little sister who will eventually go to LT, and by the time she goes there all I want for her is to feel welcome within her own school,” Lopez said. “It took me a long time to feel welcomed here, and I just want her to walk past that mural and feel accepted among her peers and teachers.”

The project involved a mix of students including Transition Academy alumni, and both Sanchez and Zavala reached out to kids who they thought would want to be a part of the project, Zavala said. Including the planning of the designs, about 25 students were involved with the mural.

“To be able to get back to school and see a few students and experience some of that teacher-student interaction was amazing,” Zavala said. “This is a really crazy time we’re living in right now, and this mural is meant to capture this specific moment in history.  It means a lot to me to be involved. Even if it’s in a small way, we’re trying to help make the world a little bit better for our future generations.”

This wasn’t the first diversity mural painted by LT, the first one being at LT South Campus B101, Zavala said. They wanted to expand the effort to include North Campus and create a mural that was visible to as many students as possible.

“The goal of this project was to artistically represent the events of this summer, specifically the events in Minneapolis and how that led into a worldwide movement in a renewed fight for equality,” Waterman said. “And then also, [it was] meant to artistically represent the centuries-long struggle that Black people and Latinx people have had in our society worldwide for equality and justice, and so that was really what that mural is about and I think it turned out awesome.”

Students Janessa Mosqueda ’22 and Devin Hughes ’21 presented the finished mural to teachers on an institute day before the start of school, Waterman said. A video was also taken and posted on Youtube to show the entire process of the mural from start to finish.

“LT is an amazing school, and they definitely have a lot of people who care about what these kids are going through, but the problems LT may have are not unique to LT; it’s a national problem,” Sanchez said. “From a student lens, I hope this mural brings validation of self within halls, and students can see they’re important and that their movement has value. I hope they can see that their school and its administrators have made it a priority to try to eliminate historical systems of oppression and are working hard to cultivate an environment that is inclusive to all.”