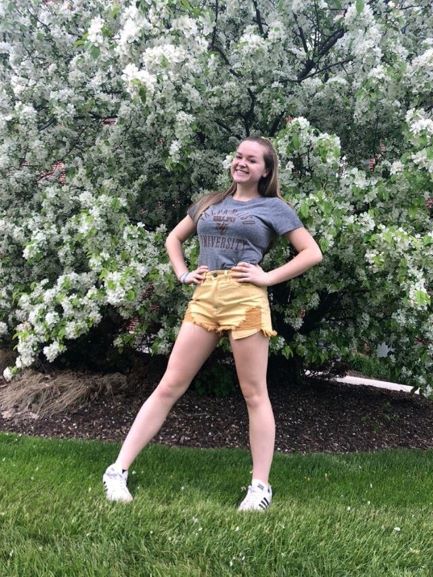 What started out as a cough, congestion and some sneezing did not worry Kristen Flaws’19. Assuming it was a common cold, she believed resting and taking some medicine would help alleviate her symptoms. However, after beginning to lose her sense of taste and smell, she began to realize that this was much more urgent than a simple cold.

“Because of what I heard on the media, I really didn’t think it could be [COVID-19] if I didn’t have two of the main symptoms,” Flaws said. “The way the media portrays COVID stresses me out more than anything else. In my opinion, it’s important to not fully listen to the news, but rather look at the CDC website and updates from the Illinois Department of Public Health.”

Flaws had started showing symptoms on April 13 after her manager at work tested positive. She soon began having severe headaches and nauseating symptoms. From seeing only the worst symptoms portrayed on the news rather than information on how varied or mild some symptoms can be, Flaws did not think to get tested until she lost her sense of taste and smell, she said.

“[Getting tested] was uncomfortable, weird, and made me tear up, but it was a quick process,” Flaws said.

Before being tested, Flaws had to call the hospital to describe her symptoms and situation to see if she had enough reason to get tested. Once they realized she was at risk, she made an appointment to get tested later that day at Rush Medical Center.

When she pulled up to the medical center, the nurses had Flaws confirm her appointment before explaining that she would need to stick a swab on both sides of her nose for five seconds each. The nurse talked calmly and counted down the seconds so Flaws would be prepared. Between the next  24-48 hours, Flaws would receive her results showing if she was a carrier for this widespread disease.

“Some days [were] better than others and it [was not] a straight path to recovery which [was] frustrating,” Flaws said. “There [were] some days where it [was] really hard to get out of bed because I [had] absolutely no energy and [felt] extremely fatigued.”

Because Flaws lives with her parents and two sisters, she became more conscientious about staying in her room when she began showing symptoms. Once her symptoms were confirmed positive for COVID,  the family wiped down the high touch areas in the house, and she had to stay completely self-isolated in her room, Flaws said.

“It didn’t change our life much. I was already working at home as were Kristen’s two other sisters,” Flaw’s mother Maribeth said.

Maribeth teaches in the Department of Medical Laboratory Science at Rush. While she does not personally take care of patients, she has taught people who perform the testing in the diagnostic laboratory to determine if patients have Severe Acute Respiratory Syndrome Coronavirus2 (SARS-CoV-2), she said. At Rush, they have been testing employees and students for the presence of antibodies against the COVID virus. Maribeth had been tested and did not carry antibodies; however the tests do not have complete accuracy, so it is possible that Maribeth could have antibodies against the virus.

“Mentally, it’s scary,” Flaws said. “It’s a highly contagious disease, and I [had] been very scared about giving it to my family or whoever they [had] come in contact with. It’s stressful to think about, and it [had] been really hard to try to focus on anything else.”

Luckily no one else in the family was symptomatic; therefore no one else was tested for the presence of the virus.

After two weeks had passed since Flaws was symptomatic, the family went back to the new normal they had found earlier in quarantine.

“My biggest struggle has been how much stress the diagnosis added,”Flaws said. “It was frightening to hear that the test came back positive. I started freaking out because I got lost in all the ‘what ifs’ that I thought about. I learned that stressing about what else could go wrong was only making me feel more sick.”

Although schoolwork had been hard to focus on due to her sickness and stress, Flaws had still managed to get all her classwork done and plan out her day ahead of time and set aside certain times for studying, she said. Friends and family had been extremely supportive, even offering to go grocery shopping for her family and bring over things that they needed to get through the day.

“I am an example that just because we are young it does not make us invincible to the disease,” Flaws said. “I was careful, I wore a mask and gloves and washed my hands regularly. I haven’t seen my friends since this all started; I only went to work. But I still got sick. It’s hard, and it’s not fun, but the more we stay inside, the quicker this is all over.”