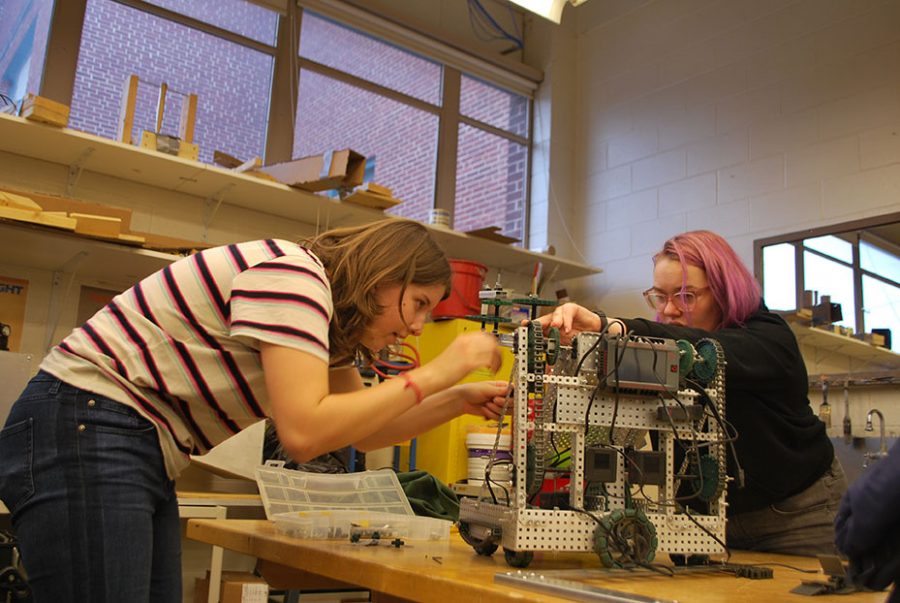 “Watching the kids grow and the excitement they have about is the best part about being the sponsor,” Sauders said. “Whether it’s in the classroom or at the tournaments the students have gained a ton of knowledge which they will be able to apply in the future at college and in the real world.”

LT has five total teams, ordered alphabetically without regards to skill, Sauders said. Team B was the first to qualify after winning the Design Award at Rich East. The two other teams qualified at Huntley, where Team A received the Judges and Skills Competition Award and Team ‘E’ won the tournament.
“Ultimately, our goal is to get to the world championships”

-Sponsor Blake Sauders
At VEX-sponsored tournaments teams typically range from five to six members. VEX challenges the teams by randomly partnering them in “alliances” with one other team. The alliances compete against each other stacking cubes in two minute matches. The first 15 seconds the robots must be pre-programmed to work independently–only after can a student control it manually.

“The first 15 seconds is definitely the hardest part because everything has to work perfectly and be super accurate,” member Charlie O’Neil ‘21 said. “If anything goes wrong then it completely doesn’t work so it takes a lot of trial and error.”

The robotics team’s end goal is to qualify for the VEX Robotics World Championship, Sauders said. Because there are only 15 teams from Illinois allotted to complete at the world tournament, they will need an impressive performance March 14-16 at Illinois State University, where the state competition will be held. The club had a team qualify for worlds in 2018, the first year the club began. This year, the tournament will be held in Louisville, Ky.,from April 22-25.

“Ultimately, our goal is to get to the world championships,” Sauders said. “Being able to compete against teams from, literally, all over the world would be a really cool experience.”