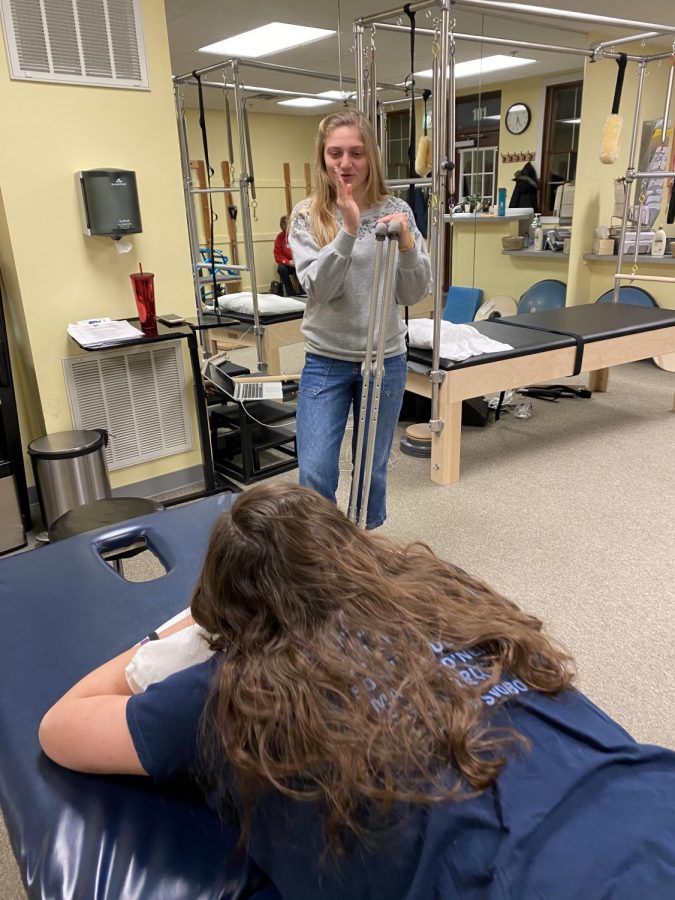 Tess Grzegorek helps a patient at the rehad facility in Countryside (photo courtesy of Grzegorek).

After interviews, resumes and a time-consuming cross country season, Tess Grzegorek ‘20 was finally able to pursue an internship with Perform Physical Therapy in Countryside, one she desperately hoped would kickstart the beginning of a career in physical therapy.

“It has really allowed me to become solidified with the fact that [physical therapy] is really what I want to do,” Grzegorek said. “It’s exposed me a lot to this field and to what committing to a job is like, along with all of the professional behavior that comes with it.”

Since October 2019, Grzegorek has worked for the physical therapy office around two to three times a week, she said. Her daily duties usually consist of scanning paperwork, typing out exercise routines, sanitizing equipment and the cots patients use and preparing the patient before the therapist arrives.

“I’ve definitely learned a lot about how to apply my knowledge to a real working environment and even things I’ve learned from my classes,” Grzegorek said. “I don’t just want to be another body hanging around. I want to truly help the people I’m around and have my internship mean something, and continue learning.”

After achieving the internship, interns are given a letter explaining what is expected of them throughout their time, such things include clothing attire, attendance, and their duties around the office, Michelle Fink, owner of Perform Physical Therapy, said. Interns are not allowed to have direct physical contact with patients, but are able to help explain the exercise routine to them ahead of time.
“If you’re curious about a field or interested in anything, I would say do exactly what Tess is doing,”
“See it in action, any job is going to be rigorous and hard, explore some fields, get into a couple of different areas and see what interests you,” Fink said.

Grzegorek has already been directly admitted into multiple six-year physical therapy admission programs, and hopes to continue to work in different physical therapy environments in the near future as well, Grzegorek said.

“It has given her some real world experience in her field as well as the chance to interact with both patients and staff,” Grzegorek’s mother, Jodie Grzegorek, said. “It is one thing to read about your interests, but it can be entirely different when you experience it in the real world.”

Grzegorek hopes to continue to pursue her internship as she finishes her high school career, and apply her knowledge as she continues her physical therapy journey in college.