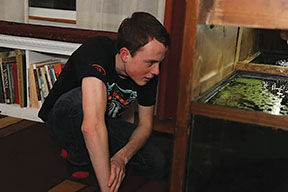 August Duwell ‘20 can walk into a pet store and name every type of fish that he sees: German Blue Ram, Red Swordtail, White Cloud Mountain Minnow, Bristlenose Plecostomus, and so on.

“I want to be a marine biologist to study fish in nature and to try to preserve as many as I can or that the world can,” he said.

“There is a lot more biodiversity in South America, so I can keep 15 different types of fish instead of two different kinds that I could get from around here,” Duwell said.

Through part of his research, he has learned about different chemicals that can be used to treat fish for disease or to help prevent bacteria from harming them, Duwell said. For instance, Methylene blue mixed with water helps to prevent fish eggs from rotting.

Duwell sells fish that he breeds to Snails to Tails Pet Center located in Brookfield, as well as to other fish breeders.

“I make enough money selling my fish to pay for feeding them and things like that, but I don’t actually make a significant profit. It’s more of just a marginal benefit,” Duwell said. “I just really like watching the fish interact with each other.”

Duwell participates in Facebook groups that allow him to trade information and experiences regarding aquariums and fish with other fish breeders.

“[August] has a very wide knowledge of keeping and breeding fish,” Shawn Orr, a fellow fish breeder from Des Plaines, said. “He is always open to learning and exchanging information. For someone as young as he is, he is advanced.”

Duwell also makes occasional Youtube videos to show the equipment that he uses and the types of fish that he has bred.

“The reason I’m most interested in fish is that it is the easiest organism to keep in your home and to observe the way they would be in the wild,” Duwell said. “You can’t capture a chimpanzee, put it in your house, and watch what it would do in nature. If you put a fish in a glass box and put some of the plants that it would see in the wild, and a few rocks, it will be completely convinced it is in the wild. I like simulating nature as much as I can, and fish is the easiest type of animal to do that with.”

Duwell spends at least a half hour each day taking care of his fish, sometimes much more, his dad, David Duwell said. This mostly consists of feeding, changing filters, testing water quality and monitoring the ph levels.

“August has always been interested in animals,” Duwell’s dad said. “Fish quickly became his favorite. We started with a goldfish and it grew from there.”