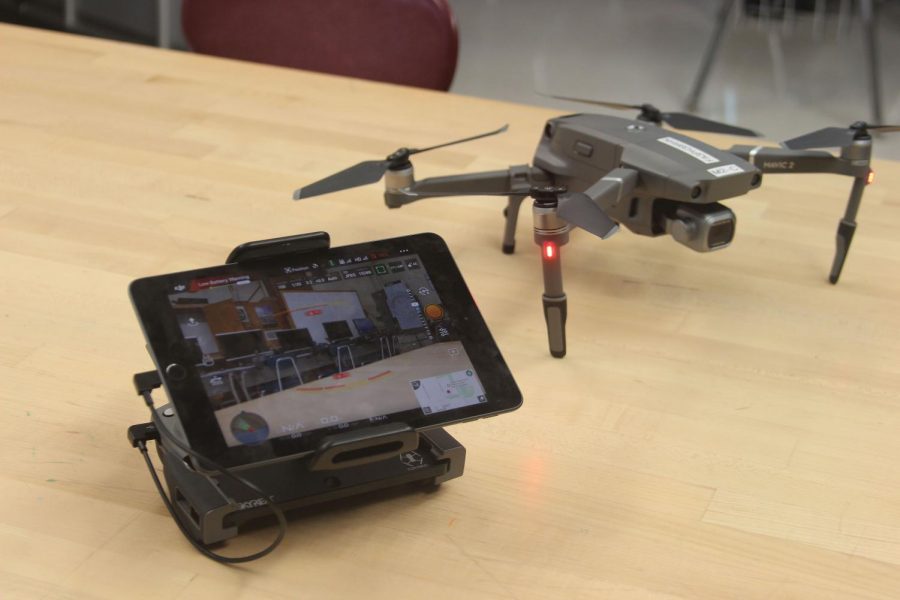 Unmanned aircraft systems like these are used in classroom for practice (Serrano/LION).

Because of the ever changing technologies tied to aviation, piloting a drone has become a popular skill that many are trying to learn. Two years ago, aviation teacher Dave Root started the process to have this become a class at LT this year, he said.

“I wanted this class because I think it’s the next big thing in aviation,” Root said. “It’s the future of aerospace and aviation.”

It is the first class LT offers that focuses on drone history, operations and practical uses for them. Once the students learn to properly work them, they take the DGAI Mavoc 2 Pro drones on “missions” to fly to certain places or take pictures, Root said. The other main focus is helping students become certified through the Federal Aviation Administration (FAA) certification test.

“On a normal day of class, we mainly prepared for the FAA [certification] test,” certified student Cam Prokaski ‘21 said. “When we weren’t, we were out flying [the drones] at the soccer fields or learning more about the history of aviation.”

The certification test itself costs $150 to take, and the student has to receive 70% of the 60 questions right to get certified, Prokaski said. Once they pass, the student will legally be able to fly a drone for money as long as it weighs less than 55 pounds. Some examples of jobs the students can take on include taking pictures for insurance companies or real estate agents, or they could work as general photographers for construction companies, Root said.

“Right now the class isn’t directly connected to any companies to get the students jobs,” he said. “But there are many apps like ‘Uber’ and ‘Craigslist’ that the students can get and post their rates to get jobs that way.”

The one downside is that the students will have to buy their own drones, certified student Andrew Cmelo ‘21 said. However, they will most likely make that money back quickly once they lock in solid jobs.

“The class prepared us very well for the certification test,” Cmelo said. “Soon I will hopefully buy my own drone. With this drone I will hopefully be taking pictures for real estate companies or any job that is offered to me.”

In the future Root hopes to include the program PIX4D which will allow the students to create an autonomous flight plan where the drones take pictures themselves. The software will also be able to string images together which could eventually lead to 3D printing and more, Root said. For now, the students are just learning the basics on drone aviation.

“I would highly recommend this class for people who have an interest in aviation,” Cmelo said. “It really does further your knowledge of aeronautics, but it’s also just a really fun class.”