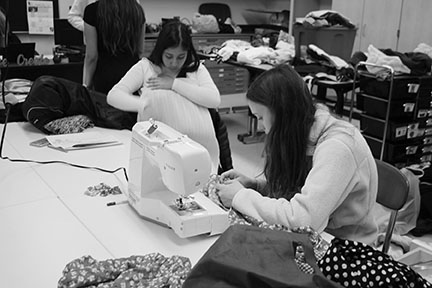 In an effort to unite the Fashion Club, president Maddy Bosshart ‘20 decided on doing a fashion show with the help of club sponsor, Lauren Gjini.

“I want Fashion Club to be a fun and united club,” Bosshart said. “I want the club to all be a big family and be able to put all our work into one thing.”

They are planning on having the show on Feb. 28 at 7 p.m. in the Reber Center, Gjini said. The clothes that will be showcased were made by club members who upcycled items they received from a clothing drive at LT.

“I think it is a great way to showcase our students’ work and gives students a place to be creative,” Gjini said. “It’s also a great advertisement for my classes.”

The past two years, fashion shows in the fall and spring were run through the fashion class, Gjini said. Since enrollment has grown, they do not put on a fashion show anymore, so the idea was passed on to the club.

“They seemed excited about it,” Gjini said. “I think it’s going to force them to work together. It’s going to take a lot of outside work. They are going to have to come together, planning, organizing, and committing to it to make it work.”

The club meets twice a month, Gjini said. Before the fashion show was proposed, everyone worked on their own things. They sewed, completed unconventional design challenges and went to Goodwill to do challenges.

“It [the fashion show] is our focus right now,” Gjini said. Students who are in Fashion Club don’t even have to be working on this but most agree and want to do it since it is something fun and unique.”

Their goal is to have each student upcycle three to five pieces both in the club and outside of school, Gjini said. Besides Fashion Club members, the only other participants are volunteer models. They are hoping for the fashion show to last an hour. Along with showcasing clothes, they are also hoping to have a speaker from the Constance Morris House, the organization the Hope Chest supports through their store, to speak about their mission and bring awareness to domestic violence.

“It’s a really great cause, and I’d still like to be paired with the Hope Chest since we’ve done that in the past,” Gjini said. They donated some clothing and accessories and will be helping us advertise the show.”

The price of attending the event is still undecided, Bosshart said. It will most likely be around $2 and proceeds will go to the club.

“[When someone goes], they can see what they can learn from the club,” Bosshart said. “They can expect to see new, funky pieces and people will be able to see how hard Fashion Club worked and make ourselves known. I want people to see us, be interested in us and have the club grow.”