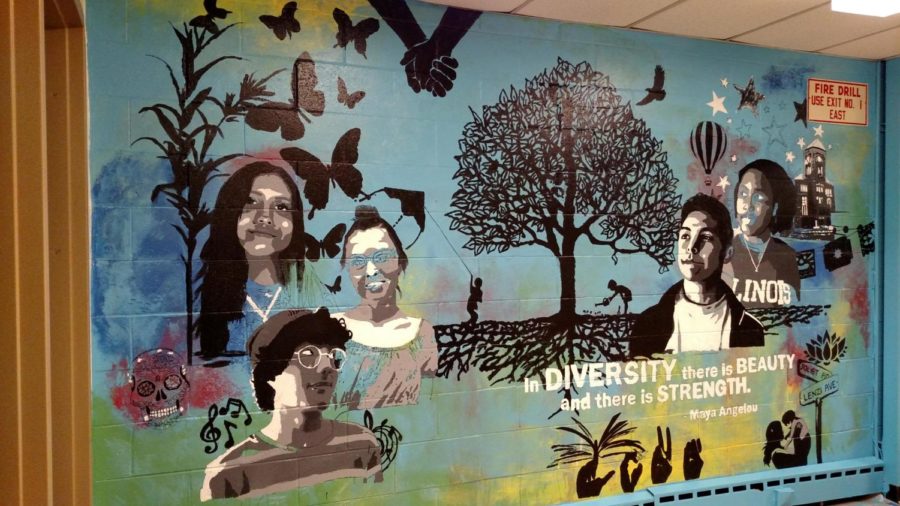 Transition Academy participants worked on the painting in B101 (photo courtesy of Jorge Sanchez).

The first diversity mural of the three that will be displayed in room B101 at South Campus was painted over the summer by students enrolled in Transition Academy.

Transition Academy is a summer program at LT that is geared towards the Latino population. Its mission is to make the students enrolled in the program feel empowered and comfortable at LT.

“These kids are coming into LT as incoming freshman, so what better way to empower them than to have them create something themselves that is going to be up permanently?” Hispanic Liaison Jorge Sanchez said.

LT is one of the few schools that has the positions of Hispanic and African American Liaison which cater to the growing demographics at LT. When students walk into the liaison’s office, they will automatically be drawn to the artwork on the wall, Sanchez said.

“It is our obligation to make every single student at LTHS feel like this is their school, and we feel that this provides students with that extra connection that shows them we care about them and want them to succeed,” Principal Brian Waterman said.

In partnership with art teacher Samantha Zavala, Sanchez was able to bring his idea of a diversity mural to life. Over a sixth month time period, Zavala and Sanchez created 20 different designs. They also included students by photographing them and asking for their feedback, Zavala said.

During Transition Academy, which took place from July 29 – August 2, each of the 55 students involved spent at least 45 minutes on the mural a day, about 10 students at a time. Through the use of a projector, the students were able to trace all of the design elements onto the wall, Zavala said.

“The mural  allowed students to hone in on their problem solving skills as they followed the design to identify where to paint the different colors and values into the shapes they had traced,” Zavala said.

During the painting process, Zavala really encouraged the students to take risks and step out of their comfort zones, Sanchez said. She instilled in their minds that it was okay to make mistakes because all of the mistakes could be fixed.

“Personally I believe that people learn more from their mistakes than out of consistently succeeding, failure is instructive.” Sanchez said. “So then, having students be comfortable with making mistakes I think was something that Ms. Zavala really instilled in the process.”

The final product of the mural consists of five faces of current and former LT students, surrounded by symbols of culture and unity. In the lower right hand side of the masterpiece, a quote from Maya Angelou reads: “In diversity, there is a beauty and there is strength.”

Incorporating specific details and symbols that were important to students, Sanchez said, gives representation to all students and specifically celebrates differences verses any negative mentality.

The two other murals that will be painted in the next two summers will also be in B101. The idea is for students to own that space, Sanchez said.

“Think about the powerful nature of coming in to a new school, being scared and being shown this idea,” Sanchez said. “This idea of what you are going to create and then going through the process of taking this ownership and painting it, seeing it come to life, day after day, not only that, but having a voice in adding elements to the product. I mean, that’s powerful.”