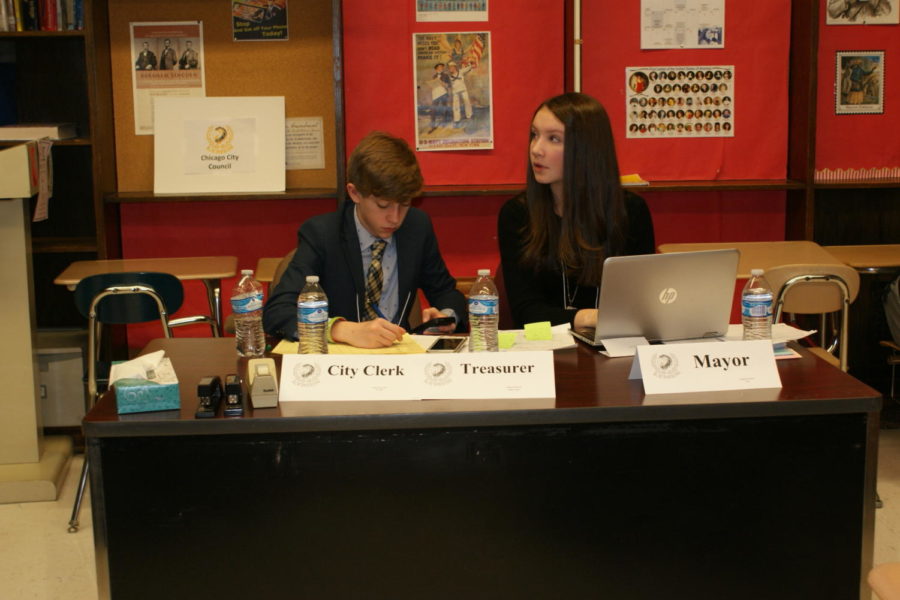 Following his deployment in 2015, Joseph Barker, teacher and Veterans’ of Foreign War (VFW) member, felt the need to continue serving his country even after fighting in combat. He joined VFW Post 10778 in Western Springs and the American Legion. From that point on, his VFW post and Model United Nations (MUN) have joined together each year to sell poppies to support their individual causes.

“After my deployment, I was looking for some way to help,” Barker said. “Once I was done with the military part of it, there was interest to me in helping some veterans that could use some assistance.”

Artificial, red poppy lapels are what the organizations sell. While there is no set price because it is donation based, students usually donate one dollar, MUN Advisor Andrew Johannes said. According to the VFW website, the poppies “honor the dead by helping the living.”

The fundraiser began around five years ago when a group of MUN students came to a VFW meeting. The club’s interest in giving back to the community and excitement towards the cause impressed VFW members, Barker said.

“The club was looking for a way to give back to the community and this seemed like a natural fit,” Johannes said. “[Barker] was instrumental in connecting us with the VFW.”

VFW and MUN split the proceeds raised in the fundraiser towards their different causes. MUN uses their money to cover the cost of attending different conferences, Johannes said. The money VFW receives from the fundraiser directly supports causes including the Hines Hospital, the Fisher House, and the Ralph Wakerly/VFW 10778 Scholarship for LT students.

“We donate a lot to wards at the [United States Department of Veteran Affairs],” Barker said. “I’d argue that 99 percent of our money goes to [the Fisher House and the scholarship].”

Poppy plant sales begin during the month of May to correspond with the VFW’s national effort by the VFW to raise money. VFW members and MUN students sell during lunch periods at both NC and SC, Johannes said.

“Helping fundraise makes it all worth it,” Lauren Crawford ‘19 said. “It’s really important to give back to a community that has given MUN so much.”

MUN has been the sole club to sponsor this fundraiser ever since it first began. Since the club discusses and debates issues such as war and humanitarian rights, MUN felt like a good fit to support the cause, Crawford said.

“[MUN] is about learning about foreign affairs and how countries interact,” Johannes said. “One way countries engage is through wars, which the veterans have experienced. It is a great way to help the men and women who have served our country.”

In addition to sales during lunch hours, VFW members will also be seen around the community selling poppies near places such as Mariano’s and Kirschbaum’s. LT and the surrounding communities welcoming attitudes have been vital to the fundraiser, Barker said.

“It certainly is gratifying,” he said. “It just reinforces what a great community we [live] in.”