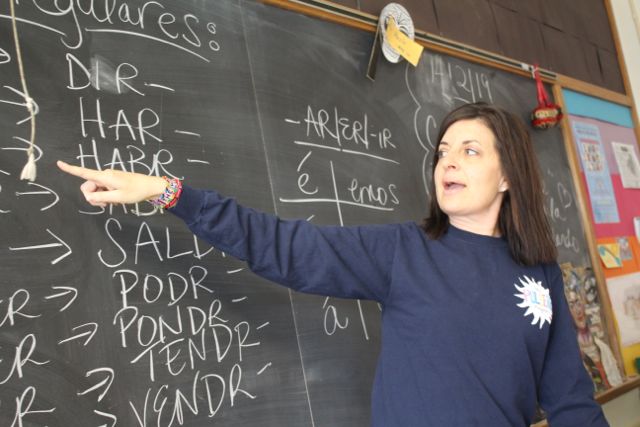 For the fifth year a row, the LT Spanish department will sell bracelets and T-shirts March 4-15 to raise money for the Pulsera Project, an organization that provides jobs for disadvantaged artisans in Spanish-speaking nations in Central America.

But in addition to raising money for a good cause, the fundraiser seeks to help students gain a greater understanding and connection to the countries and the people LT’s spanish students study—a process called service learning, LT Spanish teacher Lisa Plichta said.

“The idea behind service learning is that students are engaged in work that is designed to help others,” Plichta said. “They are understanding concepts and—in our case—understanding the world through helping these artisans in Nicaragua and Guatemala… and in learning about that, they are actually helping to make a difference.”

At one point, Plichta met with the founders of the Pulsera Project in downtown Chicago a number of years ago, and they couldn’t understand how LT continues to raise the amount they do, she said.

But she emphasized that the success doesn’t come from her. It comes from the students.

“It’s really not me,” Plichta said. “The way this has unfolded, I just follow the students’ lead and support and help them. But it has really been all student driven.”

That initiative has bore fruits over the years. Since they started raising money five years ago, LT students have raised $18,000 for the program, Plichta said. That money goes to fund fair-trade jobs, housing, health care and college scholarships, the Pulsera Project’s website said.

That success is credited to the the students, Plichta said.

“The creativity of LT students” helps set us apart, she said. “The idea for T-shirt sales was a game-changer because it extended our sale beyond the two weeks. But LT students are really generous and are really motivated to help other people. They want to change the world—and they do.”

Allison Rotstein ‘20 is one of the students this year who has gotten involved in leading the sale, which she said is a fulfilling opportunity.

“By raising this money, it is giving [the artisans] a purpose in life. It is giving them a job,” Rotstein said. “I love this cause so much, [because] it brings me so much joy being able to do this and being able to help them in so many ways.”

Guatemala and Nicaragua are two of the poorest countries in the western hemisphere, Plichta said, and the Pulsera Project helps provide jobs and health care to individuals in these countries. But there are additional benefits to participating in the Pulsera Project.

In addition to providing jobs for people the people in these countries, Fine Arts Division Chair Paula Nardi—who oversees the foreign language department—said that research shows that service learning has an impact on students performance in the classroom.

“There is a great deal of research that supports service learning and its positive impact on academic achievement,” Nardi said. “I believe that LT students enjoy the project so much because it’s fun, it’s easy, and, at the end of the day, it helps others.”