Firefighters at high risk for disease 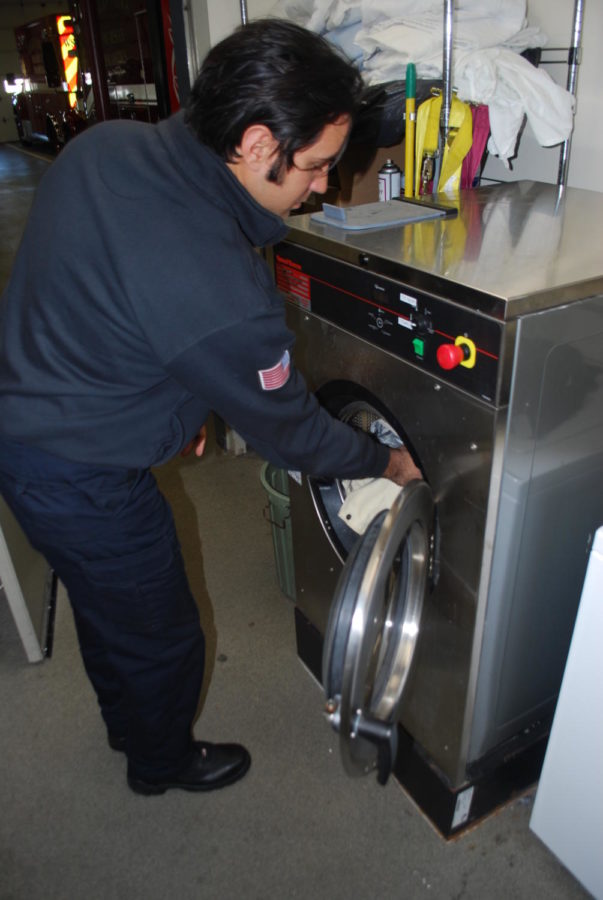 Jacob Metzger ’19 studies fire science at the Technology Center of DuPage and is a part of the Western Springs Fire Explorer program, which includes career training and instruction in hands-on skills. In addition to skills such as first aid and the handling of a fire hose, these programs emphasize how important it is to properly clean personal protective equipment (PPE) to a firefighter’s health.

Recent studies of and newly available information on the incidence of diseases such as cancer and heart disease in firefighters are showing that firefighters generally face a much higher risk of the diseases due to exposure to burning materials, Metzger said.

“It’s been a hot topic and has been for a few years in the fire service,” Western Springs Fire Captain Chuck Lichtenauer said. Two years ago, Lichtenauer attended a large firefighter conference in Phoenix, Ariz. on possible solutions to this exact problem, he said.

Repeated exposure to carcinogens common to fire scenes from dumpsters to residences causes the increase in cancers in firefighters, Lichtenauer said. Firefighters have 2.02 times the risk of developing testicular cancer and 2 times the risk for mesothelioma compared to the rest of the population, according to the Firefighter Cancer Support Network.

“The big push now is for decontamination and proper use of the layers of protective equipment,” Metzger said. “You have to wash your gear and take care of yourself after the fire.”

Actions firefighters can take immediately following a fire with their gear on the scene can help reduce exposure to carcinogens, Lichtenauer said. Some of these processes are based on newly developed best practices and standard operating procedures.

Firefighter PPE is also currently changing. A three-year study called “Validation of Cleaning Procedures for Fire Fighter PPE” works to identify dangerous contaminants common to PPE and how to properly remove them from the gear, the NFPA said. A supplement article in Fire Engineering Magazine on the study’s findings says that fires should be treated as hazmat incidents. While most focus on personal protection for firefighters has previously been focused on burn protection, now firefighters must also focus on protecting themselves and their PPE from contaminants that can harm them even after a fire.

New hoods and gloves are currently being developed to be thicker and prevent carcinogens from settling on a firefighter’s skin, Lichtenauer said. Most harmful chemical exposures are now being found to occur around the neckline.

PPE is removed in a specific order, Lichtenauer said. Special wipes are used on the face, neck, and hands in order to initially decontaminate before firefighters are able to fully clean themselves off the site. Used PPE and tools are stowed securely away from the cab in which firefighters ride back from the station in order to avoid contaminating the air, as the “Validation of Cleaning Procedures” study recommends. PPE is washed in specialized extractors meant to remove toxins.

Immediately after a residential fire is extinguished, the team of firefighters goes through a process called salvage and overhaul, Lichtenauer said. The process includes inspection of the structure and removal of valuables for the family. In the past, Lichtenauer said, firefighters would sometimes go through the house not using a Self-Contained Breathing Apparatus (SCBA), and would be exposed to harmful chemicals in the smoke still lingering in the air. Now, standard operating procedure is to remain in gear and on SCBA while a safety officer monitors the air, Lichtenauer said.

Several long-term studies are underway to examine the effects of exposure to contaminants on firefighters’ PPE and, more importantly, their health. According to the National Fire Protection Association (NFPA), the University of Arizona is currently leading a 3-year study called the “Fire Fighter Cancer Cohort Study.” According to the FFCCS, Cancer is the leading cause of fire service death. Firefighters are exposed to multiple carcinogens through both skin contamination and inhalation. Exposure through skin can cause diseases other than lung cancer, such as liver, colon, or bladder cancer, Metzger said.

“The cancer numbers are mostly coming from modern construction and the materials used in it,” Metzger said.

For example, when polyurethane and polyethylene (substances commonly used in paints and plastics respectively) burn, they release carcinogens that are not released when natural fibers and materials burn that were formerly used in home construction and furniture making.

“The cancer prevention efforts [are] being put forward by everybody from chief officers to line guys,” Metzger said. “We should see results, and big ones. We need to take care of ourselves first, and that’s the key to curving the cancer rate. The most common trait among firefighters is that we all look out for each other.”