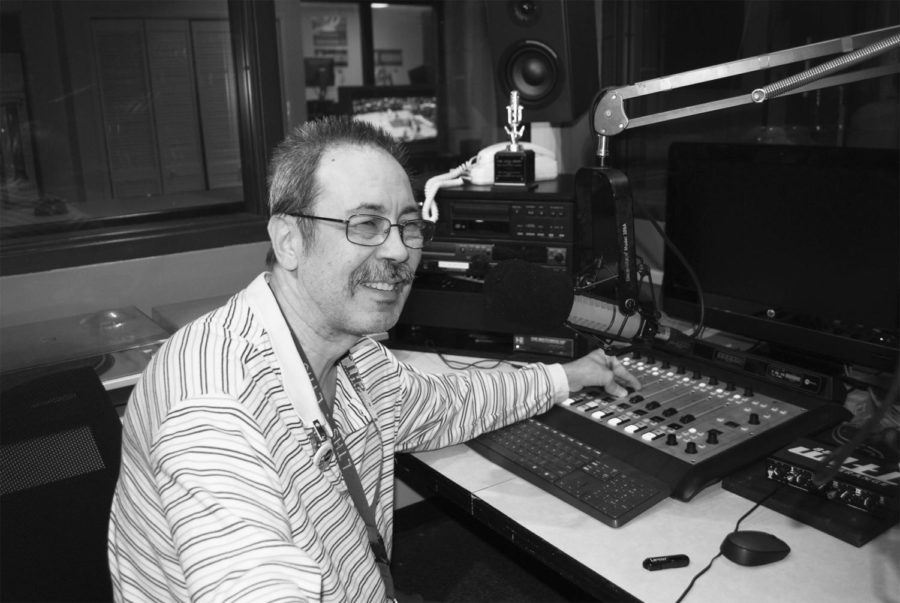 In 1975, Mike Baker walked into WLTL to try out to be an engineer as a student. The station was located on the third floor of the Vaughn building, spread out between two piano rooms, and only ran hours a day. Almost 43 years later, WLTL dominates a large section of the basement, runs 24 hours a day and utilizes technology that a majority of radio stations do not have— and Baker is still a part of the station.

“Mike is a very personable guy, which is why I think he has been able to do this for so long,”  Station Manager Chris Thomas said. “He’s able to relate to people and find out what they are going to accel at.”

Baker graduated LT in 1979, working for WLTL all four years as an Engineer. In 1993, Baker started to work as an evening supervisor, he said. Beyond just supervising, Baker also introduced a variety of computer applications that make it possible for WLTL to be one of the best high school radio stations in the country.

“Supervising is beneficial in many ways,” Baker said. “It’s fun to see the students wanting to learn. It’s fun to see how they grow in their occupation.”

Other than WLTL, Baker has worked at a multitude of radio stations. He has worked at WTEQ, WFYR and WJJG, he said. Currently, he is only supervising for WLTL and has a show every week called: “Mike Baker and the Forgotten 45s.” It airs every Sunday at 10 A.M.

“He’s really doing this because he wants to, not because he has to,” Thomas said.

Strangely enough, Thomas, who has been Baker’s superior for 13 years, was one of the students Baker supervised when he was on WLTL in high school. Though it was strange calling Baker by his first name, Thomas says that their relationship hasn’t changed.

“I always remember being greeted with a smile and being treated like you were a person,” Thomas said. “If you’re having a down day, Baker can pick you up, just by his presence.”

Students today have similar sentiments about Baker. Both Madison Waliewski ’19 and Jessie Nutter ’19 dedicate a lot of their success at the radio station to Baker.  His knowledge of radio technology makes him very accessible, Waliewski said.

“He is constantly pushing me to diversify my knowledge in the radio industry and is will to teach me anything,” Waliewski said. “He encourages me to work outside of my comfort zone, and always stood by to cheer me on.”

Other than Baker’s anniversary, it was also WLTL’s 50th anniversary this year as well. They celebrated the occasion this past April. WLTL alumni from around the area came to celebrate, including people from the class that created WLTL, Baker said.

“No matter what, Mr. Baker is always there for anyone walks in— both to listen and share a few stories,” Nutter said. “He is a big part of what makes the station what it is.”