Media Mayhem: Inside the Chicago Tribune’s unprecedented push for unionization 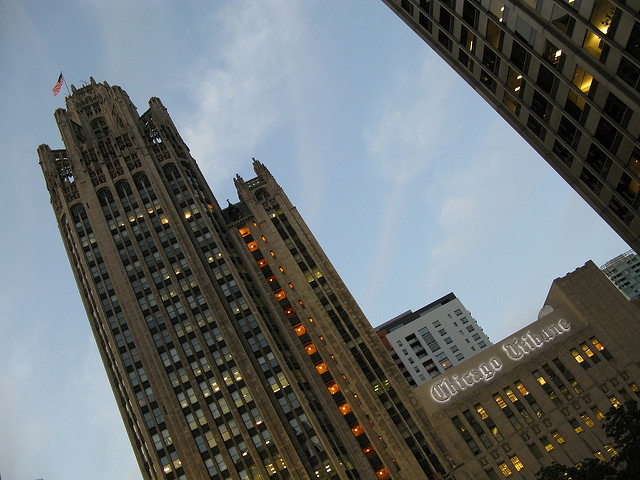 The iconic Tribune Tower, the headquarters of the Chicago Tribune, in downtown Chicago. Employees at the Tribune are rebuking the paper's long-time anti-union stance as they push for unionization among their own ranks.

As long-time readers of the Chicago Tribune can attest, the prestigious newspaper’s editorial page has consistently published eviscerating editorials that have taken a vociferous anti-union posture.

But despite that long-held position, staffers at the nearly 171 year old paper are pushing for unionization, as many argue that the corporate interests looming over their newsroom are more interested in stripping the paper of much-needed resources rather than bolstering the paper’s ability to do good-quality journalism.

“It has gotten to a point where I can’t put my faith and future—and the Tribune’s fate and future—in corporate ownership,”  general assignment reporter Stacy St. Clair said. “I have to do something myself.”

Recently, a group of employees at the newspaper have gathered together to make a push for unionization. On April 11, the organizers of the efforts made their intentions to seek unionization public, prompting many Tribune staffers to change their profile pictures to reflect their support for union representation at the Tribune.

Tribune columnist Heidi Stevens said that in an environment where “the very notion of a free press is under attack” by the White House and the shrinking size of newsrooms across the country, many staffers have felt a need to have greater say in the Tribune’s future.

“This just felt like a really essential time to do everything in our power as journalists to strengthen our newsroom and make sure it is getting the sort of resources and investment that it needs to remain thriving,” Stevens said. “We just want a seat at the table with our corporate management.”

The reporters and staffers take issue with their salaries not increasing as fast as the cost of living, lack of diversity in the newsroom, insignificant investment in the print product and a confluence of other issues.

Charlie J. Johnson, homepage editor at the Tribune, has helped spearhead the unionization efforts at the paper. According to Johnson and numerous other Tribune staffers, the Tribune has seen its ownership change repeatedly throughout recent years—all to businesspeople who they believe have not shared the same values as those producing the paper.

“Each subsequent owner has been arguably worse than the owner before,” Johnson said. “We have not had an owner with a mind to run a newspaper company with a commitment to a newspaper’s civic mission.”

He added: “These are people whose interests are pure profit seeking. We’ve not had an owner who cared about the civic mission of the Tribune for at least a decade.”

St. Clair and many unionization advocates do not take issue with the leadership at the paper itself—those who are tasked with making sure the paper is produced everyday—but rather with the paper’s corporate owner, Tronc.

“This is a referendum on a corporation that is basically looting our paper,” St. Clair said.

The Tribune’s push for union representation comes on the heels of an open revolt on the editorial pages of the Denver Post on April 6. In a series of editorials, editors accused their owner Alden Global Capital of depriving the paper of desperately-needed resources and allowing the paper to go from a staff of 250 to one with fewer than 100.

The editorials at The Denver Post and the calls for unionization at the Tribune seem to reflect the stark disconnect between the interests of newspaper ownership and those of rank-and-file reporters, with many reporters feeling that their paper’s owners care less about the journalistic mission and more about bolstering their bottom line.

At the Tribune, many union advocates cite the actions of former-Tronc Chairman Michael Ferro, casting doubt on some of Ferro’s financial choices during his time leading the organization.

“He did not seem very interested in running a newspaper,” violence reporter Peter Nickeas said. “Tronc was paying Ferro’s other company $5 million for management advice, they had spent considerable amount of money on sports tickets, meanwhile people in the newsroom were getting laid off.”

Days after unionization efforts became public, Ferro—who departed from Tronc after Fortune magazine published sexual harassment allegations from Ferro’s tenure at the Chicago Sun-Times—agreed to sell his 25 percent stake in Tronc to McCormick Media on April 13.

The sale to McCormick Media, valued at nearly $208 million, hands Ferro’s shares over to a relative of the famous McCormick family, who historically owned the Tribune, CNN reported. Johnson said it is hard to assess whether the unionization efforts played a role in the transaction.

Other staffers echo Nickeas’ assessment of Ferro’s time at Tronc, with the $5 million contract awarded to Ferro’s consulting company coming up repeatedly as a sign that money was being siphoned away from the newsroom and instead towards Tronc big-wigs.

“There is money to be spent on newsrooms; Tronc is not broke.” Stevens said. “We just want to make sure that we have a say in where the company’s money goes and point more of it to the newsroom where the work is actually being done.”

Meanwhile, the Tribune’s transportation columnist, Mary Wisniewski, said that the lack of investment has lead to some staffers flocking from the paper for higher paying jobs at other newspapers, news outlets and sometimes in entirely different fields of employment.

“We have lost a lot of people to better paying jobs,” Wisniewski said. “There are a lot of empty desks at the Chicago Tribune that were previously filled with very talented people. When we lose that, we lose a lot of strength in the newsroom.”

While the unionization efforts have only really intensified over the past few months, Johnson first began exploring the idea in April 2017. His initial interest, however, was curbed by how difficult that task would be, Johnson said.

“Because the whole thing was broadcasted on Twitter and covered in pages of newspapers, it really soften up the newsroom,” Johnson said. “They made it a lot easier to do here. They really blazed a trail.”

St. Clair said that the Times’ efforts to unionize also helped in displaying Tronc’s modus operandi once a newsroom joins a union.

“We are fortunate in that the LA Times was the canary in the coal mine for us,” St. Clair said. “It was a hard fought battle there, but they told us that they did not face any retribution.”

As Johnson worked on making unionization happen, he recruited Nickeas and court reporter Megan Crepeau who helped to lead the efforts. The push really began in earnest January when the LA Times officially voted to become unionized.

“I just put the wheels on the cart, everyone else helped me push,” Johnson said. “I just got the wheels.”

The three assembled the union organizing committee which reached out to and answered employee’s questions, worked to generate general acceptance of the unionization efforts and set up the infrastructure required to effectively orchestration the unionization push in the public eye, Johnson said.

“When we had spoken to essentially the entire newsroom more than once, the support was there for the union,” Johnson said. “So then we started the process of distributing the union authorization cards and then the news went public Wednesday, [April 11].”

Tribune Publisher Bruce Dold did not respond to a request for comment. However, in a staff-wide memo obtained by Splinter News, Dold told staffers that the top-editors at the Tribune respect the staff’s decision on unionization.

“I received the letter earlier today expressing the intent of a number of newsroom employees to form a union,” Dold wrote in the memo. “Everyone in Chicago Tribune management has the utmost respect for the decisions you make and for your rights on this issue.”

Additionally, Dold reaffirmed the top-editor’s commitment to investing in the newsroom and allowing the Tribune to continue to put out journalism that serves their readers.

Marisa Kollias, a spokesperson for Tronc, did not respond to request for comment by press time.

The Tribune staffers are seeking to be represented by the NewsGuild-Communication Workers of America Union.

The organizers are distributing union authorization cards which will then be sent to Tronc who could either accept their unionization efforts or force Tribune staffers to vote on whether or not to form the union.

If the vote succeeds or Tronc voluntarily accept their unionization, the Tribune staffers would then be officially represented by the union. Johnson said that—while some may be skeptical over whether or not the union will achieve all of what it wants to achieve—they are mainly on the same page when it comes to their displeasure with Tronc ownership.

“We all want to get to the same station, but we just have different tracks of getting their,” St Clair said.

Meanwhile, Dold told staffers in his memo the Tribune’s top editors are ready to listen to their concerns.

“If you have questions, concerns, ideas, please bring them to Chrissy, to Peter, to me, to your direct managers,” Dold said of Managing Editors Christine Taylor and Peter Kendall, respectively. “We’re listening.”

Dold ended his memo by saying: “My door is open. Please come on in.”