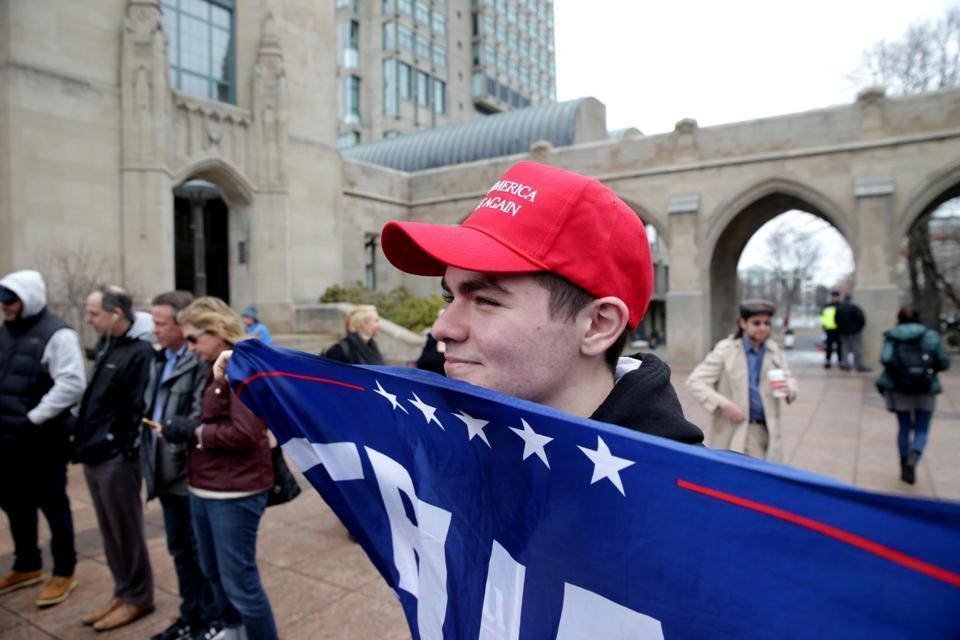 On a warm, sunny morning near Charlottesville, Va., on Aug. 17, hundreds of determined right-wing activists paraded a statue of Confederate General Robert E. Lee to protest its removal. Among them stood LT alumnus and former student council president Nick Fuentes ‘16 chanting the rally’s slogan “you will not replace us” in unison with the other protestors.

“I was there to represent concerns of mass immigration, multiculturalism and historical revisionism,” Fuentes said. “The government of Virginia colluded with armed, leftist thugs to intimidate us and ultimately keep us from exercising our constitutional rights, but we showed up, we had a permit, and we were peaceful.”

Fuentes, who has since been featured in Time Magazine, The Boston Globe, Morning Today on NBC, Fox News, and several other news networks, believes that the outcome of the rally was a success for himself and his right-wing companions.

“I think the protest put us on the map in terms of our concerns,” Fuentes said. “What you’re seeing in this country is a cultural genocide. When people go and destroy our statues, they’re destroying our heritage and they’re rewriting our history, and seemingly because it’s white people, it’s okay.”

Throughout his time at LT, Fuentes was always vocal about his political beliefs, and he was never afraid to share his thoughts on any issue, student council advisor and Director of Student Activities Peter Geddeis said.

“We had a lot of political discussions over the four years I have known him,” Geddeis said. “I was always impressed with him, even from his freshman year. He was always very composed, charismatic and well spoken.”

Since his start at LT, Fuentes strengthened his interest in politics through his involvement in Model UN, his political talk show on WLTL and his creation of “The Nicholas J. Fuentes Show” through LTTV, all which brought his radical opinions to the attention of his classmates, he said.

“It was much more civil in high school [than in college], and I think that owed to that fact that I was much more moderate on many issues,” Fuentes said. “Since then, I’ve gone much farther to the right and many more people are upset by that.”

After his high school graduation, his activism in politics only intensified as he continued his education at Boston University, he said.

“I didn’t want to go to a college where everyone would agree with me,” Fuentes said. “For me, college has a lot less to do with the education and more with the experience. I wanted to see how my convictions would stand with professors and students in Boston, and I had a lot of fun.”

Due to the city’s overwhelming liberal influence, Fuentes found it entertaining to engage with people on campus over political topics, he said.

“The biggest reason [behind my activism] is that it’s hilarious to me,” he said. “I’m not going to pretend that I put on my ‘Make America Great Again’ hat and get the Trump flag out because of some political crusade. It’s just fun for me to go and engage with people.”

For the majority, verbal confrontations between Fuentes and students on campus tended to escalate quickly, Boston University student Will Chang said.

“He is definitely not shy or subtle,” Chang said. “His activism on campus is inflammatory on purpose and very in your face. Often times, it doesn’t seem like he is trying to have a productive discussion, for he’s usually yelling.”

In response to Fuentes’s appearance at Charlottesville, Chang regards the situation in a similar way to what he believes most students at Boston University think.

“It means more to me how he reacted after [the Charlottesville protests], because I do think some people went there thinking that it was going to be a normal conservative rally,” he said. “Afterwards, he went full Nazi and posted statements [on Facebook] about how ‘the fire will rise’ and other provocative comments. It’s kind of disappointing but I guess he’s just finding his own way.”

Since his Charlottesville appearance, Fuentes made the decision to leave Boston University and will most likely attend Auburn University in the spring, he said. For now, he is continuing his residence in the LT area.

“It’s not safe to be a Trump supporter in Boston, especially a well-known one,” he said. “I’ve gotten many death threats that were not addressed by the police or the administration, and it came to a point where I could not comfortably live on campus.”

Although there has been much confusion over which political group Fuentes aligns with, he has made it clear that he is no more than a traditionalist conservative, a follower of Pat Buchanan and says he is not affiliated with the Alternative Right or Neo Nazi groups, despite few similar concerns. When ultimately explaining the foundation of his ideals, Fuentes believes it comes down to one major idea.

“I am a Christian, and I think that if anybody is a Christian, they have to believe in the Devil,” he said. “What we’ve seen in the past 20 years are very evil, sinister forces taking control over our government. And if you don’t stand for what’s right, and are complicit in this hostile takeover of our country by very evil, horrible people, I think you’re just as guilty as they are. And that’s why I’m doing this.”