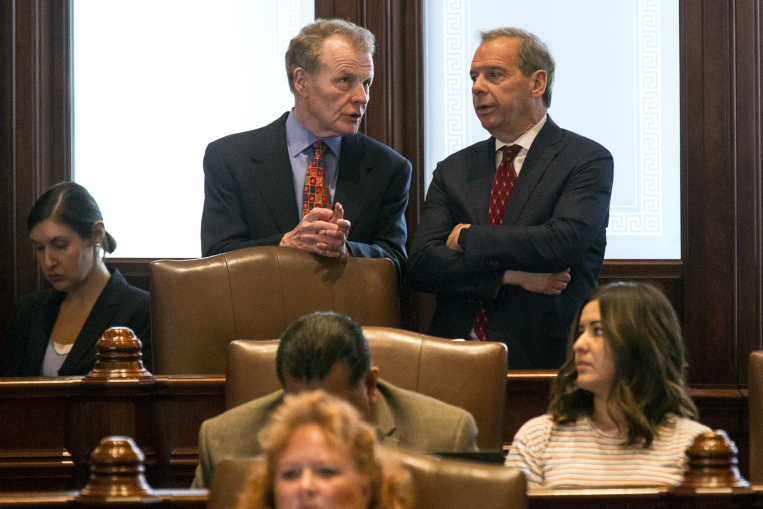 House Speaker Michael Madigan, D-Chicago, left, and Senate President John Cullerton, D-Chicago, talk on the Senate floor Tuesday, July 4, 2017, at the Capitol in Springfield, Ill. The Illinois Senate has OK'd an annual spending plan of $36 billion following a critical vote to raise the income tax rate. If approved by Republican Gov. Bruce Rauner, it would be Illinois' first budget in more than two years. (Rich Saal/The State Journal-Register via AP)

Politicians in Springfield brought the nearly 3-year-long budget impasse to a close July 6 when lawmakers voted to override the veto of Gov. Bruce Rauner, a Republican, restoring a full budget to a state that has been lacking one for the majority of Rauner’s term.

“The people in this chamber today did not do what the was easiest today, but they did what was necessary for the state,” Democratic Speaker of the House Michael Madigan said, according to the Chicago Tribune.

The Budget impasse has become a symbol of the crippling partisan battles in Springfield and has been a pervasive aspect of the political discussion in Illinois since it began.

Organizations that rely on state funding—schools, universities, social service agencies—have been starved of the capital required to perform their services.

Politicians on the left have sought to blame Republicans and Rauner in particular for the impasse, while Republicans have argued Democrats and Madigan are those at fault.

Democratic candidates seeking to challenge Rauner in 2018 have derided the governor for, in their view, stalling efforts to pass a full budget, a notion that Rauner and his GOP allies vehemently deny.

Some of the candidates claim the governor had been stalling “budget negotiations by refusing to compromise on issues that have little to do with the budget,” a spokesperson for Ameya Pawar, a democratic candidate for governor, said in an email to The LION back in April.

Rauner, however, argues that the blames lays at the feet of the Democratic insiders who want to “tape-over” Illinois problems, instead of addressing the issues facing the state.

If the budget wasn’t enacted, the state ran the risk of having its credit rating downgraded to “junk status,” a fate narrowly avoid by the resolution July 6.