Local Bands Rock Out, Crush at Battle of the Bands 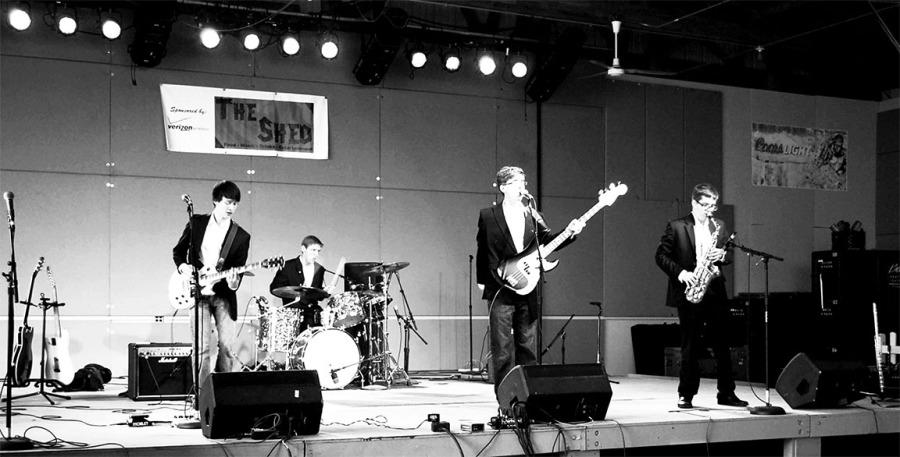 As Christian Naval ‘15 closed his set for the Illinois Battle of the Bands, jamming on the guitar to “Sweet Home Chicago” by Rob Johnson with his senior band, Far-Sighted, a feeling of gratification swept over him.

“I felt really proud of LT,” Naval said. “The fact that two bands from the same district took first and second really speaks for the LT music program.”

This elite competition consisted of five teen bands from Illinois on Aug. 16 in “The Shed” at the Illinois state fair in Springfield. To get there, Far-Sighted won the Buffalo Grove Local competition and placed second at the Algonquin Regional competition, according to the Battle of the Bands website.

Their style of classic rock and blues led them to perform pieces like “Hard to Handle” by the Black Crows, “Messin with the Kid” by JR Wells and an original written by Mitch Galgan ‘15 called “Come Back Again”. This band consisted of Naval on guitar, Galgan on bass and vocals and Nathan Zaworski ‘15 on drums.

“I had a great time preparing with the band and really developing our sound and taking it to the next level,” Galgan said. “It was really good to hear feedback and be able to get better as a group.”

The sophomore band, Trance, that placed first in the competition consisted of Nick Chompko ‘17 on piano, August Domanchuk ‘17 on guitar, Jared Frank ‘17 on bass, Ryan Gorey ‘17 on drums and Ally Lubera ‘17 on guitar, piano, saxophone and vocals. Trance got there by playing some more well known songs like “Counting Stars” by One Republic, “Purple Haze” by Jimi Hendrix and also an original “It Ain’t Easy” by Frank.

Trance was formed in a local school jazz band has been together for three years and plays various forms of pop, rock and blues. This already successful band has an illustrious legacy and plans continuing to play shows and to do what they love, Gorey said.

“We were definitely more confident than in the past years and we’ve absolutely gotten better as a group,” Gorey said. “We knew we had the potential to get to the state competition and we came together as musicians and were really able to succeed.”