What qualities make a good president? This is Point-Counterpoint: presidential qualifications. 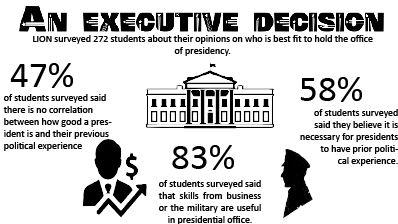 The Value of True Experience
by Greg Smith

Many in our world are, unfortunately, motivated by the expedient fulfillment of short-term desires. They prefer instant gratification over deferred reward, even if that deferred reward is substantial. These people are, generally speaking, children. They are uninterested in most anything that requires time, dedication, or patience.

Because these people vote, politics often follows their preferences. Just as many people value expedience over long-term good, political goals are almost always oriented towards what is good right now rather than what is good for the future. Case in point is the debate surrounding the electoral college. The electoral college is an impressive example of the framers’ foresight. They knew the country would need the institution to ensure that populated areas alone could not entirely control politics. Additionally, although the framers wanted the government to have a democratic character, they (correctly) associated direct democracy with mob rule.

After the 2016 election, some who did not like the result called for the electoral college to be abolished. Their candidate lost, so they expressed a desire to change the system. But the elimination of the electoral college would have been irresponsible. It’d give a narrow majority of the public what it wanted quickly at a substantial long-term cost.

The argument that presidential candidates need prior political experience arises from the same expedient desire to discredit the same event. Donald Trump won the 2016 election. He’s far from perfect, and many have disagreements with him. So they believe that a rule which requires presidential candidates to have prior political experience would solve the problem. This argument is not only made for the wrong reasons, but the position itself is wrong.

First of all, to suggest that a presidential candidate needs prior political experience would be a bit like saying that the wealthy should not donate to charities they have not worked for. Money helps charities, whoever it comes from and leadership experience in high levels of business and/or the military generally makes a strong presidential candidate, all other things considered equal.

This is not to say that a president can’t have prior political experience, it’s just that a senator or governor does not all automatically make a better president than a general or a CEO. Our military’s flag officers are generally excellent leaders who have great leadership skills and are very familiar with what is easily the president’s most important job: national security. Someone like former Secretary of Defense Gen. James Mattis would likely be much more qualified to serve as commander-in-chief than a young one-term senator with no executive experience and little experience even in a full-time job (shout out Barack Obama). Mattis served as a Marine officer for 44 years and retired as a general. Sure, he hasn’t held an elected office, but he excelled in the U.S. military, one of the few meritocracies outside of professional sports. (George Washington had almost no experience in elected office and Dwight Eisenhower had none.)

Rather than asking how long a candidate has had a often irrelevant government title, we should ask ourselves another set of questions: Is this person capable of making an accurate assessment of the issues that our country is currently facing? Does the candidate have leadership ability and a willingness to work with political adversaries or will his ego alienate them? Would this person be a good steward of our national resources? Does this person understand and embrace our nation’s ideals, goals and priorities? Is this person knowledgeable on foreign policy and would he or she make a good commander-in-chief? Will his or her judicial appointees interpret the law as it was written and intended when it was written, or will they merely make conclusions up as they go along in order to fit with their agenda? Is this a person of character who has the courage to stand up for what is right, no matter the costs?

These are the important questions. Of course Trump misses on some of them, especially about ego. But the fact that he is not a perfect leader should not disqualify an entire group of people from serving as president, when there is plenty of talent to be found in that pool.

Imagine you discover you have a heart condition- you need to have one of your heart valves replaced. It is not an emergency surgery, so you have some time to schedule the procedure and choose the  surgeon. You’ll carefully review your options, research each doctor including education and medical training, questioning how many times they have successfully performed this procedure confirming their experience and qualifications. You narrow down your options—a young surgeon who has never performed the surgery alone before, but who has seen it done and assisted—or a skilled, well-accomplished surgeon who has done the valve repair dozens, if not hundreds of times. Who do you choose?

It’s shouldn’t come as a shock that people want a more experienced professional to be performing high-level, high-intensity work. If the surgeon you chose made a critical error during the procedure, it would be tragic, but it would only affect a relatively small circle of people. Now imagine if that man was operating on the entire population of the United States—but he isn’t a surgeon, he’s the president leading a nation of over 3 million people.

It’s no secret that President Donald Trump is a stranger to the political stage. While some might feel this is a “refreshing change” to the stereotypical Washington politician, they are wholly mistaken. There is a difference between electing a younger or atypical candidate to office, and allowing a person who has no political, legal, or military experience to serve as the leader of the free world.

Historically, previous political or legal experience has been an unspoken prerequisite for the commander in chief of our nation—George Washington served in the Virginia House of Burgesses for 15 years and as president of the Constitutional Convention. Abraham Lincoln was a lawyer and sat in the Illinois House of Representatives for eight years and in the U.S. House of Representatives for a full term, and John F. Kennedy served six years in the Senate and eight in the House. Barack Obama was president of the Harvard Law Review as a student, served as an Illinois senator for several years before moving on to the Oval Office—all four men are regarded highly as popular presidents.

Only four presidents have not held elective office positions in the past century before their presidency—William Howard Taft, Herbert Hoover, Dwight Eisenhower, and Trump. The first three, however, had experience at the top levels of government by appointment, with Taft and Hoover serving as cabinet officers and Eisenhower as the Army Chief of Staff. This is still political experience, and offers exposure to the world of politics.

In Article II, Section 1 of the U.S. Constitution, there are three requirements for the president of the U.S: “No person except a natural born Citizen, or a Citizen of the United States, at the time of the Adoption of this Constitution, shall be eligible to the Office of President; neither shall any person be eligible to that Office who shall not have attained to the Age of thirty five Years, and been fourteen Years a Resident within the United States.” These requirements were set in place for the well-being of the country; the president not only will lead the nation, but also represent the country on the world-stage. What does it say about the American people if we elect a rookie to the top office? Can we trust an inexperienced president to have to the expertise, the maturity, the wisdom or the simple know-how that the job commands?

If Trump’s presidency is any indication, then the answer is an emphatic no.

Throughout the past two years of his term, Trump has had more than his fair share of scandals and unpopular decisions. Most recently, on Feb 15th,  he declared the increased drug use in the US a state of national emergency. He did this  to support his campaign promise of building a wall along the Mexican border. Declaring a national emergency is not an act to be taken lightly, though Trump’s misunderstanding of politics enables him to use the government and the nation itself to further his own agenda.

Let us not forget about the 38-day government shutdown that left millions without pay, also done in order to raise funds for his wall.

Experience is critical in order for a job to be done well. It’s important to bring new faces with fresh ideas to local governments, state legislatures, and Washington. But there’s no need to jump in the deep end and go for the biggest office right away—if someone, even a celebrity wants to get involved in politics, they should start at their local government and work their way up. There’s nothing wrong with having a common name be elected president, but they must meet the basic qualifications of the job. When we elected a man who lacks political experience as president, we elected someone who lacks knowledge, commitment to the position and respect for the democratic foundation on which our government is built upon. We deserve better.