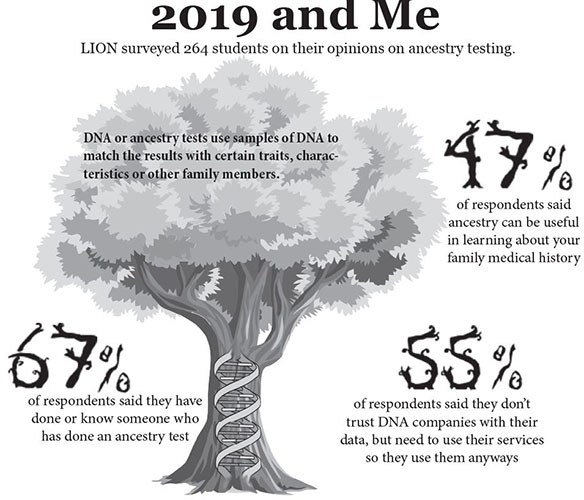 There have been  countless strides in DNA technology in recent years and those strides have resulted in a surge in popularity for DNA testing services. But some people have concerns about the information you’re giving away when you find out more about your DNA.

Two LION Newspaper staffers debate the topic in this issue of Point-Counterpoint. To watch a discussion by the LION writers, watch the video bellow or watch it on the LTTV YouTube account.

Would you ever post your social security number on your Instagram? No. You would never share something that private because you know that once someone else has it, your information can be abused and your identity stolen. Your DNA is your genetic social security number, and it would be foolish to give it away. Once you send your DNA, you have no control over what the company is doing with your information. The company can’t take ownership of your DNA, but they can claim ownership of that sample and reuse it in the future.

When you send in your spit for a DNA test, you are also giving away your family’s DNA. Peoples’ data has been used during criminal cases, such as the Golden State Killer. While uncovering criminals is a good thing, being able to track people through others’ DNA is not. You can unintentionally give away family members’ genetic information, even if that person doesn’t take a test themself.

Since you can do these tests on your own, it can be hard to interpret results without the help of a doctor. It can be helpful, and in some cases lifesaving, to learn genetic information because it can help you take preventive and precautionary steps against diseases such as cancer. While giving away ancestry tests as holiday gifts can seem like a fun experiment or a useful tool, in reality, you can be giving your relatives much more stress and unwanted responsibility as a result. Families have learned unwanted information such as adoptions that were unknown previously, according to an article on Mashable.

Some ancestry testing companies have started to use mutations in DNA sequences to look for a few serious diseases, such as celiac disease, Parkinson’s, and late-onset Alzheimer’s. For example, 23andMe received permission from the FDA to test and identify risk of breast cancer in three mutations in two genes, according to NPR. This incomplete test can rule out thousands of other mutations that can also lead to an increased risk of breast cancer, which can lead to a decrease in the number of women who pursue follow-up tests. People who have participated in an ancestry test need to know that the results are a starting point that can be used as a follow up with your doctor, but they can not be substituted for common check-ups and other routine healthcare necessities.

While health insurers and employers are prohibited from accessing your DNA test results, long-term care and life insurance companies can view your results and change your rates based upon it, according to the same Mashable article. The company 23andMe recently gave access to user’s data to GlaxoSmithKline, a British pharmaceutical company. Once you’ve sent in your DNA, the results are in the company’s system and they aren’t in your control anymore.

On the surface, DNA tests can seem like a fun experiment to do with your family, but in reality there are many privacy concerns that go along with allowing companies access to your genetic code.

In late April of last year, the police arrested the suspected “Golden State Killer”, a man who terrorized California for over 10 years with killings, rapes and burglaries. The arrest came 40 years after his reign of terror, thanks to a DNA website.

According to the New York Times, the website GEDmatch was used to track the DNA from the crime scene and created a family tree using a relative of the suspect. His arrest was only possible because of new technology that find people through the DNA of their relatives. Thanks to DNA testing, a serial killer and rapist will be held accountable for his atrocious actions.

In recent years, it has become increasingly popular to send DNA to companies like 23andMe to discover ancestry information. 23andMe and other companies provide services that give you information on ancestry, genetic health, and trait reports. These companies have settled themselves in our world, through advertisements, gift idea lists, and that one aunt who is obsessed with your family history. It’s not a bad thing that DNA and genetic testing has become more common.

DNA testing has had a positive impact on the 21st century because it gives its customers valuable information about their family disease history and helps people feel more connected to their family.

Not only does ancestry DNA testing provide people with a stronger connection to their family history, but it also can give its customers a genetic health report that highlights their risks for different degenerations, deficiencies and diseases. The new developments in DNA technology have led to more people making healthier decisions to prevent diseases and conditions that they are more likely to develop due to their genetics. For example, because my dad has a history of Alzheimer’s in his family and my mom has a history of heart disease in her family, my parents have cut many highly processed foods, like cool whip that lead to these diseases out of their diets as preventative measures.

For some people family history holds a high value in their life and ancestry DNA testing can help make meaningful connections. After my mom’s best friend lost her father, she started using ancestry.com as a way to trace her family history. She traveled to Panama, to see where her grandpa helped build the Panama Canal, and to Europe to meet distant relatives and see where her family lived centuries before her. Through the connections she made, she was able to feel closer to her dad, even though he was no longer with her. People may consider family history useless, but to some it can help ease the parting blow, or learn new things about the people who were dear to them.

Genetic testing is beneficial in various different circumstances, but that doesn’t mean that it is always is.  Health insurance companies can use DNA to determine health conditions of their customers, and even deny them coverage if they have too many health issues. New technology is created to make people’s lives easier, and give them new opportunities. Giving health insurance companies their customers’ DNA is wrong and does not serve the public. In order to end the risks that DNA testing has, we need to continue learning about our DNA and what this technology can give us. Knowing your roots is important and DNA testing brings even more information to our fingertips about our families, our health and who we are. DNA testing isn’t going anywhere and it is clear that there are huge benefits to this innovation.